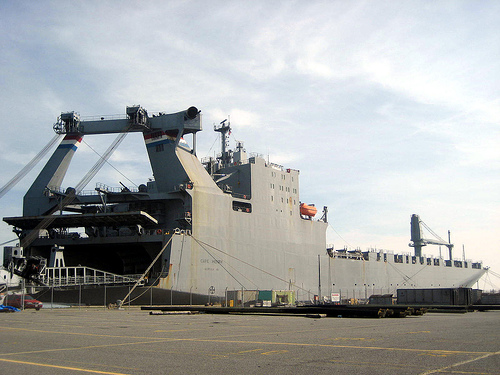 Roll on/Roll off shipping is a method of car shipping that is commonly used to transport cars and other vehicles to overseas destinations. The term refers to a form of auto shipping in which vehicles are driven on and driven off board a special purpose transport ship rather than lifted onboard and lifted off the ship via cranes. Unlike container shipping, in RoRo shipping, cars are transported on open car decks on board Roll on Roll off vessels.

RoRo carriers are basically custom-designed vessels that are equipped to transport any sort of cargo that can be driven or wheeled on board the ship. The ships have large on-side ramps than can be lowered to a dock to allow cars and other vehicles to be driven on and off the vessel. The ships feature large multi-level parking decks with clearly marked lanes for parking cars.

Large RoRo carriers can easily transport between 200 and 300 vehicles at once. Some RoRo vessels are designated as Pure Car Carriers (PCC), while those that transport both cars and trucks are referred to as Pure Car Truck Carriers (PCTC). Automobile manufacturers were the first ones to use such ships to export cars to other countries. Over the past two decades though, Roll on/Roll off car shipping has become an increasingly common method for transporting cars, trailers, trucks and other vehicles between countries.

"My father was very impressed with your service. I’ll keep your name and number handy for next time." — Sally, Las Vegas, NV

"Appreciate your hard work on coordinating our vehicles transport with our move. Both of our cars arrived on time without a scratch!" — Susie, Dallas, TX

"Your driver was great. He pulled my car up onto the truck in no time, and to my pleasant surprise I watched him unload from the same spot. I know he did his job right." — Joe, Lakeland, FL